Samsung revealed the design of a possible future bezel-less smartphone in a utility patent filed with the World Intellectual Property Organization (WIPO) in April 2018 and published on November 29.
As detailed by the product images included within Samsung's WIPO patent initially discovered by LetsGoDigital, the bezel-less smartphone will not come with a metal or plastic frame around the body. 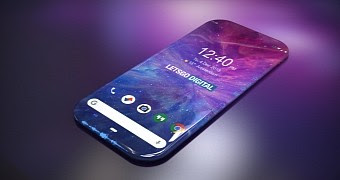 Moreover, the face and the sides of the potential Samsung smartphone described in the "Display device and electronic device including the same" patent will be entirely covered by a flexible display.
Although there are no headphone jack or USB-C ports added to the design presented in the WIPO patent, the final product - if Samsung will ever use it to build a bezel-less smartphone - will most probably feature all connectivity options, most likely on the back of the device.
The back would be the most probable choice given that the published patent shows that all sides of the phone are part of the display, with icons being added to mark them as such.
The sensors and camera on the patented bezel-less phone could be integrated under the display

Furthermore, although Samsung's WIPO patent does not provide any details regarding the front-facing camera, speaker, or sensor placement, the highest probability would be to have them under the display seeing that the entire front side of the camera is a sizeable bezel-less panel.
The patent WIPO published on November 29 also shows that a potential Samsung bezel-less smartphone might even arrive in multiple form factors, with the Koreans adding a polygon looking body with 6 rounded corners as one of the possible shapes.
According to Samsung's patent, "In an exemplary embodiment, as described above, the display device may not include a bezel (i.e., a non-display area) when viewed from the front side, or a bezel-less display device may be effectively manufactured [..] and the flexible display areas extending from the flat display area and bent (e.g., extending downwardly from the flat display area)."